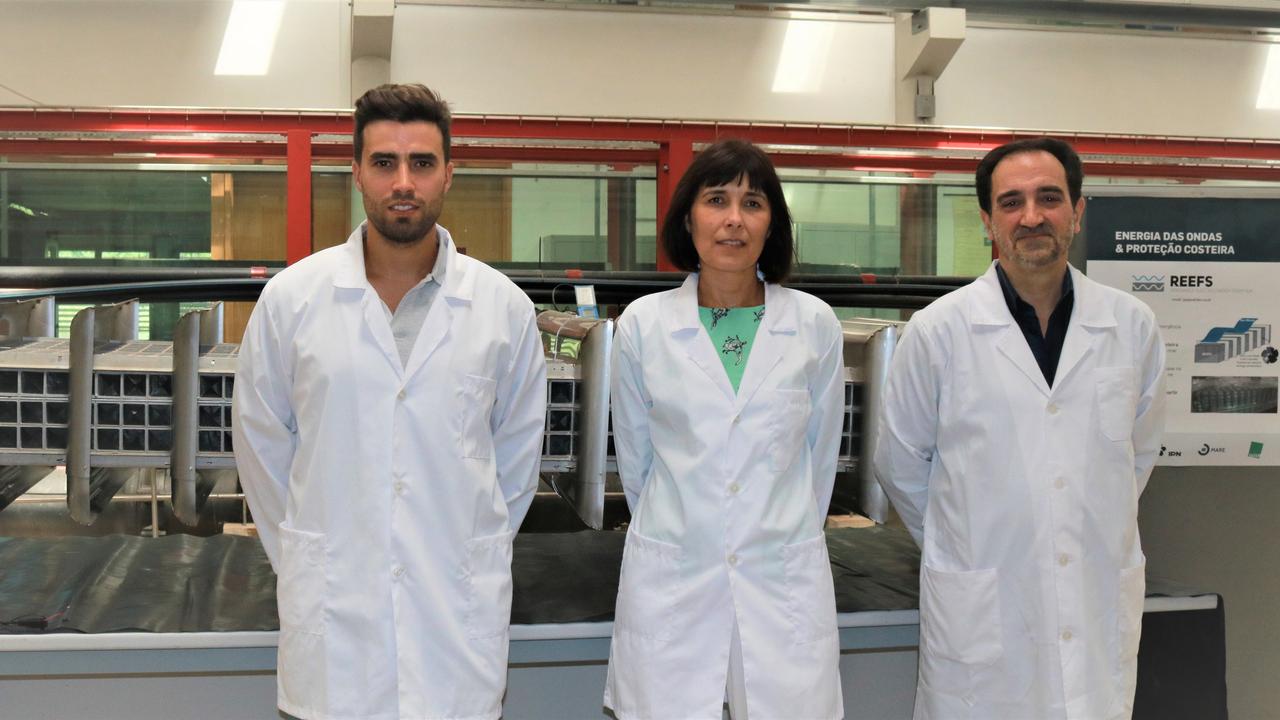 A research team of the University of Coimbra (UC) has developed an innovative device that converts the energy stored in ocean waves into electric energy. The invention is already patented internationally.

The device, called REEFS – Renewable Electric Energy from Sea, is the result of 8 years of research carried out at the Laboratory of Hydraulics, Water Resources and Environment of the Department of Civil Engineering of the Faculty of Sciences and Technology of the University of Coimbra (FCTUC).

This wave energy converter developed at the UC is a modular coastal device that is totally submerged, invisible to the sea surface. "It is supported on pillars and the rest of the bottom of the sea is free for all kinds of marine processes", explains the project leader, José Lopes de Almeida.

On the other hand, he adds, it is a device that "seeks to use existing technologies, namely the ultra-low head turbines that are applied in mini-hydroelectric plants and that have recently become commercially competitive. It is possible to adapt this technology to the sea and use it to take advantage of the unevenness created by the waves, which are often 1 to 5 metres high on our western coast ".

Almeida further adds that basically, "what the device does is to transform the alternating motion of the sea waves into a continuous flow of water inside the REEFS converter. This flow, created between the crest and the waves' trough, can be used to drive the ultra-low drop mini hydro turbines", which represents a considerable technological leap as "we do not need to develop a technology from scratch, we can adapt an existing hydroelectric technology".

In addition, this technology contributes to reducing coastal erosion as it can act as an artificial reef, inducing the waves to break at an early stage and thus remove some of their energy before they reach the shore line.

José Lopes de Almeida points out that research in this area is particularly relevant today given the current international situation caused by the war in Ukraine. "The current situation raises attention to the extraordinary vulnerability of Europe in relation to its energy dependence. For example, in the case of Portugal, the country still imports about 2/3 of its energy resources today. Therefore, looking at endogenous marine resources and seeking to use them, creating value for the economy, is a necessary challenge, particularly in Portugal, because it is a country that has a fairly extensive coastline in relation to its territorial area.”

However, for this technological solution to reach the market, new studies and tests are still needed, clarifies the project coordinator: "the concept is already proven. We have shown in the laboratory the transformation of the entire chain - from the wave to the production of electricity. However, to reach the commercial phase, the device has to be optimised and tested on successively larger scales until we install a pilot project in the sea, and only then can we move on to the commercialisation phase of the technology".

Thus, the team - which, in addition to José Lopes de Almeida, includes Fernando Seabra Santos, Aldina Santiago, Maria Constança Rigueiro and Daniel Oliveira - is applying for funding, with the support of the UC Business - Office of Technology Transfer - that will allow the deployment of a device in the sea, on the Portuguese coast, "a very important step to test, under real conditions, the performance of the device and assess all the constraints that may arise from its use in the marine environment."

Despite the path the project still has ahead of it, the estimate is that, when the product is ready to be used in the sea, it will be more competitive, similar to what happened with wind energy. "From a competitive point of view, it has a potential comparable to wind energy, although the market is not as wide, with the advantage of having no impact on the landscape, providing greater predictability in production and being located on the coast where most economic activity is usually centred," concludes José Lopes de Almeida.

The video presentation of the project is available at: https://www.facebook.com/UCBusinessGlobal/videos/1900365786829431