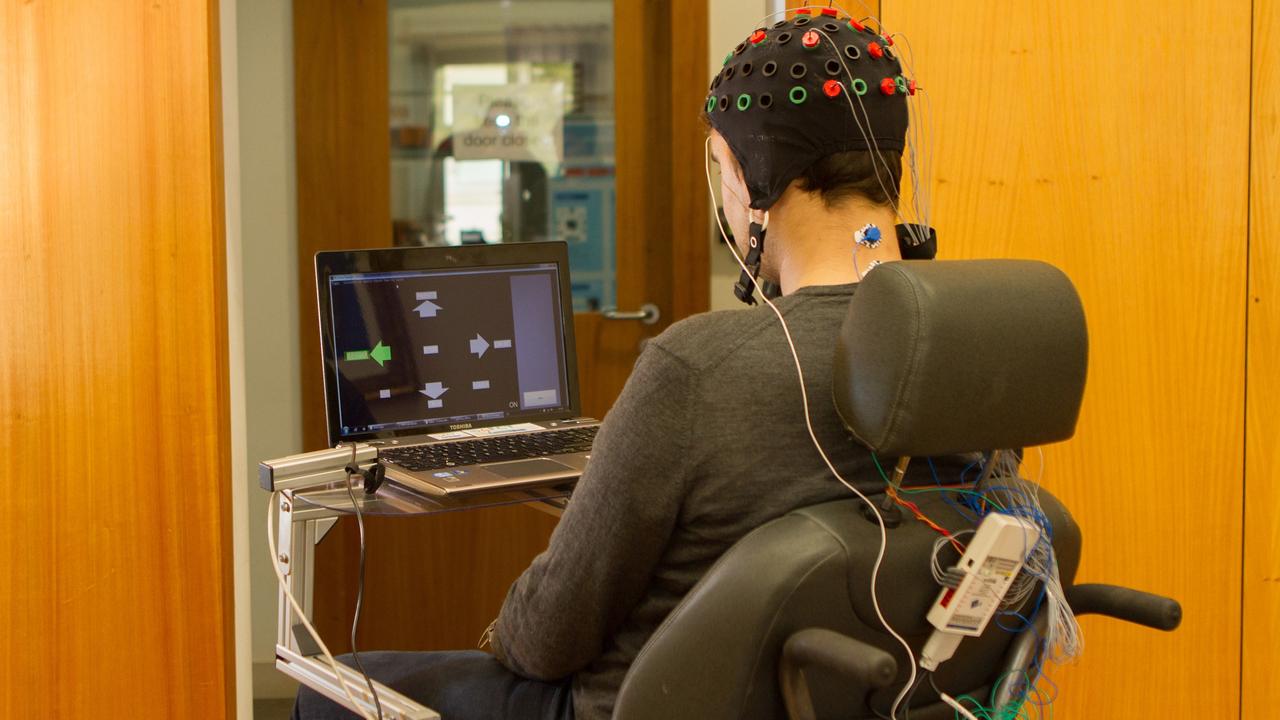 A Portuguese research team of the Institute for Systems and Robotics of the University of Coimbra (ISR) and of the Polytechnic Institute of Tomar (IPT) have developed a computer interface system, which makes it able to achieve a high reliability and nearly 100% accuracy in brain-controlled wheelchairs, with no high mental overload on the user..

Brain-controlled wheelchairs are a very promising solution for people with severe motor impairments who cannot use traditional interfaces.

However, the low reliability and precision of brain-computer interfaces (BCIs) based on electroencephalography (EEG) and the high mental effort required of the user - who provides the commands through brain signals to drive the wheelchair, without any muscle activity - , make its use unfeasible for safety reasons.

In order to overcome these major obstacles, the system proposed by the ISR and IPT team, whose results are already published in “IEEE Transactions on Human-Machine Systems”, is based on a new approach that combines three components: personalised rhythm, adjusted time commands and collaborative control.

In other words, explains Gabriel Pires, principal investigator of the project, “in the same system it is possible for the BCI to automatically detect when the user wants to send a command or not, allowing the latter not to have to be permanently focused, but only when he really intends to send a command, at his/her own pace. The time to detect the user's intention is also automatically adjusted to allow a constant performance, being for example less susceptible to distractions or fatigue; and, also, a collaborative control between the user and the machine”.

According to the researcher, this collaborative control means that the wheelchair “has a navigation system that, on the one hand, performs precise navigation manoeuvres, dismissing the user from this effort, and, on the other hand, corrects / interprets possible erroneous commands sent by the BCI”.

The feasibility of the system was validated in several experiments carried out with 6 people with severe motor disabilities, from the Cerebral Palsy Association of Coimbra (APCC), and 7 non-disabled participants people (control group). Participants had to navigate three pathways in office-like environments, with hallways, doors, offices, accesses and obstacles. “For instance, one of the tasks consisted of navigating through narrow doors, which is one of the most challenging tasks in terms of mobile navigation given the dimensions of a wheelchair”, highlights Gabriel Pires.

In order to test the interface, the team had to develop the navigation system of the wheelchair, adapt the chair ergonomically, to be able to be used by people with motor limitations. The team also developed the methods of decoding the electroencephalographic signals of the ICC.

The experiments proved an unprecedented level of precision and reliability, exceeding 99%, highlights the ISR researcher and professor at the Polytechnic Institute of Tomar: “the increase in reliable accuracy was a great achievement, that is, maintaining high performance over time, regardless of conditions. In fact, in some sets of experiments we obtained 100% accuracy with the control group and 99.6% with the group of people with motor disabilities”.

These results show, for the first time, that it is possible to “design systems controlled by BCIs with high performance and reliability and controlled in a natural way (without high mental effort by the user and at his/her own pace) by people with severe motor limitations”, says Gabriel Pires, stressing that this evaluation was obtained “not only in a quantitative way, but also qualitative through questionnaires made to the participants. The test scenarios, although realistic, are still quite controlled and less complex than those found in the domestic environment required by daily tasks”.

However, despite the results being highly promising, representing a giant step towards the use of this technology, the professor and researcher warns that this technology is not ready for commercial use yet. In addition to these experiments taking place in a relatively controlled environment, much less complex than domestic environments, another challenge is related to the systems for the attainment of electroencephalographic signals”.

On the other hand, he concludes, “the assembly and ergonomics of the electrodes have yet to improve. Finally, in order to use the system in more dynamic and demanding domestic environments, we will have to introduce more perception modules of the surrounding environment, a work that we are already starting”.

This new brain-computer interface was developed as part of the research and development (R&D) project “B-RELIABLE: Boosting reliability and interaction on brain-machine interface systems integrating automatic error-detection”, co-financed by European funds and the Portuguese Foundation for Science and Technology (FCT). In addition to Gabriel Pires, the team that created the BCI includes Aniana Cruz, Ana Lopes, Carlos Carona and Urbano J. Nunes.