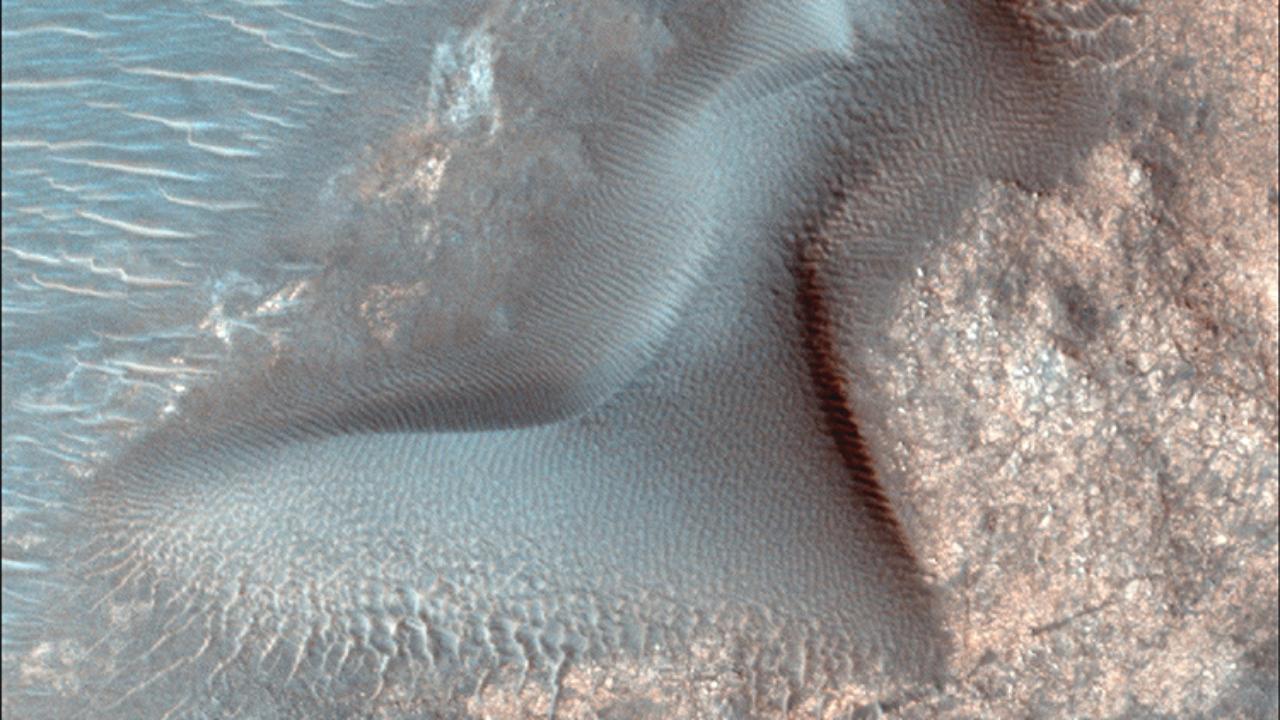 For the first time, an international team of planetary scientists, including David Vaz, from the Centre for Earth and Space Research of the University of Coimbra (CITEUC), observed the movement of giant waves of sand, called megaripples (“megaondulations”), on the planet Mars.

This discovery, the result of about a decade of observations (between 2007 and 2016), is particularly relevant, since until now it was thought that these structures - since they are made up of thicker sand particles - would not be active (the wind would not currently be able to move these particles). “As there was no evidence that they were moving, they were believed to be “relics” of the strongest wind activity that might have existed in the past on Mars. However, our observations are quite conclusive and contradict this view, that is, the megaripples on Mars are definitely active”, explains David Vaz.

To reach the conclusion that the “megaondulations” are moving around the red planet, albeit slowly (about 10 centimeters per year), the team led by Simone Silvestro, from INAF-Osservatorio Astronomico di Capodimonte (Italy), analysed over a thousand of these sedimentary structures, using high resolution images captured by NASA's “Mars Reconnaissance Orbiter”, in two regions of Mars: McLaughlin crater and Nili Fossae.

The participation of the CITEUC researcher in this discovery focused on the “processing of the surface images obtained by the probe and the use of various previously developed techniques, which allow to measure with great precision the sediment flows (transport speed and quantity of sediments transported by wind) on the surface of Mars”.

"In this study it was particularly important to measure the speed and the way in which megaripples, a specific type of ripples that are formed by the transport of sediments due to the action of the wind, moved over a period of time of almost 10 earth years", Vaz highlights.

David Vaz also contributed with a set of measurements of migration velocity and sedimentary flows to dunes from other regions of Mars, “which served to frame and explain the observations made in the two areas in which the study focuses”. He also participated in the work that took place in the Moroccan desert in 2017 and 2019, where “terrestrial megaripples” were studied, a work that served as a preparation and inspiration for the discoveries we made later on Mars”. This is because the phenomenon observed on Mars is also registered on Earth, although at very different scales and speeds.

Also according to David Vaz, who got his PhD in Geology from the Faculty of Sciences and Technology of the University of Coimbra (FCTUC), this study “is important because it shows for the first time that these sedimentary structures (megaripples) are active, and that the wind on the Martian surface will be strong enough to move larger particles; that is, this discovery confirms that Mars is a very active planet from a geological point of view. Even at speeds much lower than on Earth, geological processes continue to shape the planet's surface”.

The study, which was recently published in the Journal of Geophysical Research: Planets, was highlighted and commented on in Science last week. The video with examples of the movement of the dunes and megaripples is available at: https://www.youtube.com/watch?v=hvTnTsZOZGs&feature=emb_logo and the scientific paper at: https://agupubs.onlinelibrary.wiley.com/doi/full/10.1029/2020JE006446.