Herbarium of University of Coimbra 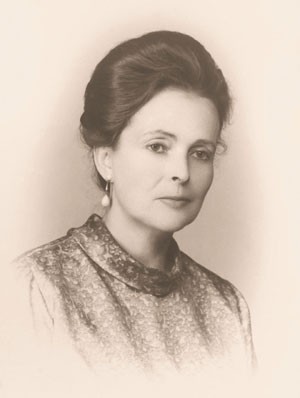 Rosette Mercedes Saraiva Batarda (born 1.10.1916, Redondo, Alto Alentejo – died 28.05.2005, Coimbra) started high school in Lisbon in 1928 and got her degree in Biology in 1941 at Lisbon University having had excellent marks. In that same year she attended a congress in Natural Sciences in Lisbon where she met the young botanist Abílio Fernandes. There, they started a life-time liaison, both personal and professional. Rosette Fernandes moved to Coimbra, they married and Abílio Fernandes became the director of Botany at Coimbra University – all in 1941!

In 14.11.1947, R. Batarda was appointed Naturalist at the University, in the Museu, Laboratório e Jardim Botânico, where she worked all her life, retiring as Principal Researcher.

She started by working in the re-organisation of the Herbarium (COI), up-dated the nomenclature of many specimens from Portugal and from the then colonies. She participated in many botanical expeditions in Portugal which enriched the collections, and travelled in Mozambique together with the team from the Laboratory of Botany of the University of Lourenço Marques plus A. Fernandes. This material is both at COI and the Instituto de Investigação Científica Tropical.

Rosette B. Fernandes produced many publications, c. 250 between 1945 and 2000. It was particularly relevant her contribution to the knowledge of the African flora. She wrote many accounts for Flora Zambeziaca, Conspectus Florae Angolensis and Flora de Moçambique, also papers published mainly in Boletim da Sociedade Broteriana and Garcia d’Orta. Most of her research in Africa was on the Anacardiaceae, Aviceniaceae, Cucurbitaceae, Lamiaceae, Melastomataceae and Verbenaceae.

She also collaborated with accounts for Flora Europaea vols II (1968), III (1972) and IV (1976) on 11 genera in the Boraginaceae, Asteraceae, Labiatae, Malvaceae and Scrophulariaceae. Later on R. B. Fernandes also contributed with 8 genera for Flora iberica (vols III, IV e V, 1993-97) in the Brassicaceae, Crassulaceae, Cucurbitaceae, and Malvaceae.

R. B. Fernandes also studied the flora of Macaronesia, especially the ferns Asplenium and Dryopteris and Alnus and Cucumis, publishing altogether 33 papers. Earlier on she also published with A. Fernandes on the caryology of Narcissus.

She was an eclectic writer in botany. Ethnobotany, history of botany, botany in popular poetry (geopoetics) and in Portuguese Heraldics, the journeys of Manuel Galvão da Silva through Mozambique and some economic plants such as watermelon and some pumpkins, were all themes for Rosette to publish on.

From her vast work in plant taxonomy many new nomenclatural combinations were published, as well as more than 50 new taxa to science, some at generic level (e.g. Gravesiella). Species such as Marsilea batardae and Polypodium batardae were dedicated to her.

Rosette Batarda Fernandes died at the age of 88. Her postumous publications were in Flora Zambesiaca in the Aviceniaceae, Verbenaceae e Lamiaceae.