Júlio Henriques became Professor of Botany and Director of the Botanic Garden in Coimbra in 1873. Soon, he realised how short he was of herbarium material for the identification of Portuguese plants. Apart from Pierre Boissier and Georges Reuter, Heinrich Moritz Willkomm was the most knowledgeable foreign botanist who travelled in the Iberian Peninsula in the 19th century. 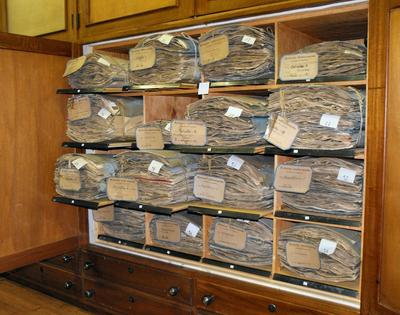 By 1877 Henriques was corresponding with Willkomm. The first letter of Henriques to Willkomm is lost and some others of that correspondence have also disappeared. In the Botanic Archivals in Coimbra remain 30 letters and a postcard in French and 2 letters in German exchanged between the two botanists. The letters deal with problems on identification of Portuguese plants, and bibliography. The later ones refer to the acquisition by Coimbra of the private herbarium of Willkomm that included the plants of the Mediterranean region. In the archival it is missing the letter of Willkomm where he states his wish to sell the collection and why. In 1878 the two men organised to meet in Paris during the Exposition Universelle, and possibly would have then discussed the transaction. But for some reason Henriques did not go to Paris and the meeting did not take place. In fact, the two men never met.

Shortly afterwards, on the 18th October 1878, Willkomm wrote to Henriques and explained in detail his conditions for the selling of the herbarium and the contents of it [“... mon herbier contenant à présent 10.000 espèces en 100.000 échantillons au moins (il será augmenté encôre par des collections considérables de plantes de la Corse et de l’Espagne, que je recevrai bientôt)...”]. His main concern was that the herbarium would remain intact and would not be incorporated in other major collections. Júlio Henriques was in a position of guarantying this and, in fact, the Herbarium Mediterraneum Pyrenaicum et Canariense of Willkomm has remained separate in Coimbra till today.

On the 22nd December 1878 Willkomm sent the contract that was agreed by both parties. The price was 7000 francs to be paid in a first instalment of 2000 francs on the arrival of the first part of the Herbarium, followed by five of 1000 each, one per year. The herbarium was to be sent to Coimbra via the Portuguese Consul in Hamburg. The first crate with all cryptogams, gymnosperms, monocots, apetalous and gamopetalous dicots was to be sent till May 1879; diapetalous dicots till October 1880.

Bureaucracy frustrated the two men at times but everything ended well. The last part of the collection was sent from Hamburg on the 18th of May of 1880. All payments were dully made, the instalments been withdrawn from the yearly budget of the section of Botany. 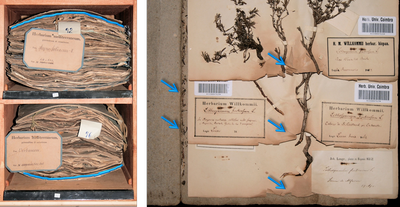 The plants in the Herbarium are in the original 176 bundles and are organised according to the Prodromus Florae Hispanicae (Willkomm & Lange). There are 28.000 specimens. They are mounted on thin paper that is very acidic and is now quite brittle. For that reason loan requests of this material are not possible but the whole collection is in the COI Herbarium Catalogue with images.

The Willkomm Herbarium includes plants collected by Willkomm himself and of other collectors of the time. The geographical area is wider than expected. Apart from the Mediterranean, the Pyrenees and the Canary Islands there are plants from central Europe and even central Asia, up to the Songaria desert.