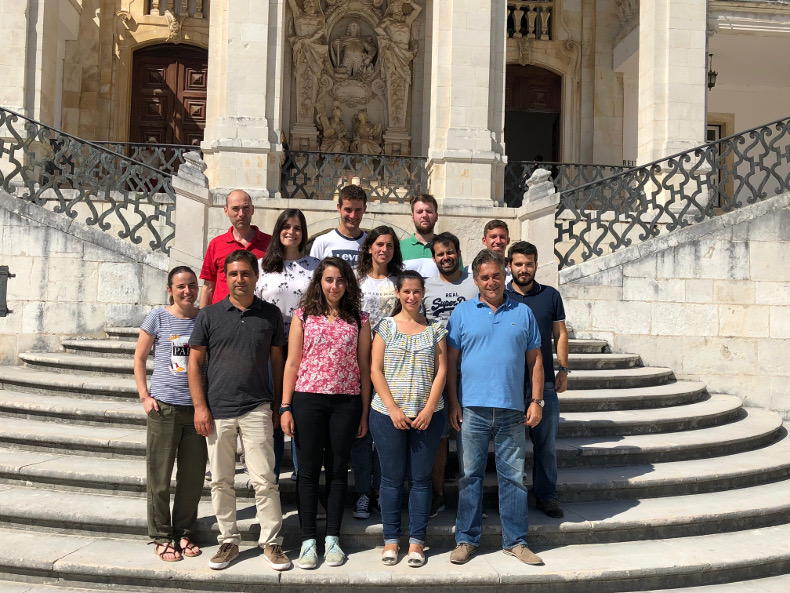 The Photonics and Reactivity Lab is a place for initiative and creative thinking, to explore less-traveled paths and dare question conventions using the tools of science. The unifying theme is the use of light to open new frontiers. Together with various labs in the Coimbra Chemistry Centre and elsewhere, we design new molecules and customize equipment to explore our original ideas.
The first drug patented by a Portuguese university that reached clinical trials was designed in our laboratory. We are also at the origin of a technology introduced in the aesthetics market and tested for medical applications. We cherish innovative solutions and encourage spin-offs of lab members, but believe that long-lasting solutions to human needs must be rooted in fundamental science.

The dogma of chemical reactivity is that, for elementary reactions, higher barriers lead to slower reactions. In Nature Communications 9 (2018) 2903 we present intramolecular electron transfers that become faster as their apparent activation energies increase, and oppose the “inverted region” energy dependence predicted by Marcus. The deficiencies of Marcus theory are exposed and an alternative model for electron transfer is discussed. On-going research calls for a change in paradigm in the theory of electron transfer reactions.

PDT combines a photosensitizer, light and molecular oxygen to generate cytotoxic reactive oxygen species that kill cells. As explained in the highly cited paper published in Photochem. Photobiol. Sci. 14 (2015) 1756 (top 1% of the academic field of Biology & Biochemistry), PDT has both a local and a systemic effect. The elimination of the primary tumor and control of metastasis were achieved with a bacteriochlorin photosensitizer named redaporfin and designed by us, as published in Eur. J. Cancer 51 (2015) 1822. The mechanisms through which PDT with redaporfin kills cancer cells were presented in EMBO J 37 (2018) e98354, showing that the ER/GA play a role upstream of mitochondria in the lethal signaling pathway.

Protein (miss)folding is at the origin of various neurological diseases. The folding dynamics and energetics of β-helical segments in proteins were described in J. Phys. Chem. B 122 (2018) 3790, using photoinduced pH jumps with photoacoustic detection, and revealed the role of salt bridges and cation-π interactions. The singular fluorescence from aggregated myeloid fibrils has eluded observation, but was unambiguously identified and characterized (to appear soon).

The new frontiers of medical imaging and treatment demand the ability to visualize microstructures that target the diseased tissue. By imaging where, when and how much of a marker chromophore appears in the target tissue, it becomes possible to refine basic preclinical research and improve therapy. In J. Med Chem. 59 (2016) 4688 we present rationally-designed near-infrared fluorophores developed in our group to image 1 mm tumors not visible with the naked eye. Current developments in our group focus on molecular contrast agents for photoacoustic tomography.

The fundamentals of light interaction with matter (and molecules) still raise technical challenges and controversies. The accurate measurement of light doses in PDT was explained in Photodiagn. Photodyn. Ther. 23 (2018) 75. The transfer of photon momentum when light crosses media with different refractive indexes (n), manifested in the nanometric deformation of the interface between the two media, was clearly separated from thermoelastic expansion and shown to be consistent with the Minkowski momentum pM=pairn (to appear soon).

Luzitin SA – Founded in 2010, Luzitin is a pharmaceutical company focused on the pursuit of innovative solutions for photodynamic therapy and photodiagnosis
LaserLeap SA – Founded in 2011, LaserLeap is a biotech company with a proprietary drug-delivery technology in the aesthetics market.

Through these facilities and in our labs, the group regularly uses
– Absorption, fluorescence and phosphorescence from the UV through the NIR.
– Time-correlated single photon counting and fluorescence up-conversion (under installation) with time-resolution between 1 ps and 100 ns
– Transient absorption with time-resolution from 100 fs to 100 µs.
– 2D IR spectroscopy with fs resolution (under installation).
– Photoacoustic calorimetry with time resolution between 5 ns and 10 µs.
– Fluorescence, confocal and multiphoton microscopies.
– Photoacoustic tomography (under installation).
– Cell culture lab with flow cytometry and Western Blot.
– Incident photon-to-current efficiency and solar simulator equipment
More than half of the lab members are qualified for designing and executing small animal experiments. Such experiments are regularly conducted, after approval by ethical and regulatory committees, in the animal facilities of CNC (Center for Neuroscience and Cell Biology) and ICNAS (Institute of Nuclear Sciences Applied to Heath), both at the University of Coimbra.