About the Department of Physics

The Department of Physics at the University of Coimbra is a school committed to excellence in teaching and research. This can be seen in the quality of our bachelor, masters and doctoral degrees; it is seen in the research we do and in the diversity of international collaborations that our researchers have; it is seen in the quality of our graduates, in their employability and professional success. This school has its origins in 1772 but the future is on the horizon. That's where we look. 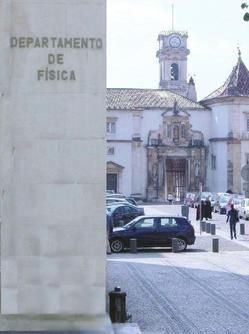 The Department of Physics of the University of Coimbra was created in 1772 under the name of the Cabinet of Experimental Physics and was then part of the Faculty of Philosophy.

During the 19th and 20th centuries, the Cabinet of Physics kept up with the scientific development of that period and maintained considerable exchanges with the most prestigious European scientific centers of the time, even in the country's most isolated periods.

Currently, the Physics Department is part of the Faculty of Science and Technology, and is now equipped with modern facilities for teaching and research, in its own space at the core of Alta de Coimbra. The library is recognized as one of the best of its kind at European level. It has good classrooms, with excellent acoustics, and well-equipped laboratories, both for practical teaching and research, as well as a modern computer network, which extends to the entire building. In computational terms, it is an important center of the high-performance computing network, having one of the fastest supercomputers installed in the country.

The Physics Department has one of the most qualified faculty in the country, with 43 PhDs. Its research groups cover most areas of physics and related technologies. The number of scientific publications places the Department of Physics among the most productive on a national scale. The research centers that it integrates are regularly subject to evaluation by external entities appointed by the Foundation for Science and Technology. The last review rated these research units as "Excellent" and "Very Good".

The Department of Physics integrates several European research networks, and has scientific collaborations with the main research centers in Europe, namely with CERN, ESA, ESO, RAL, etc... there is a wide exchange of ideas and ideas. cooperation.

The connection to the community is very important to us, namely the strong connection to non-university schools and companies. Proof of this is the fact that more and more students are doing internships in companies, during their academic career, and the active participation of companies in research and development projects leading to master's theses, in the various master's courses that the Department of Physics coordinates.

The original rooms of the "Gabinete de Fysica", house now the Museum of Physics. There you can appreciate the instruments that once were part of teaching and research and which are today an important heritage, one of the most important in the world.